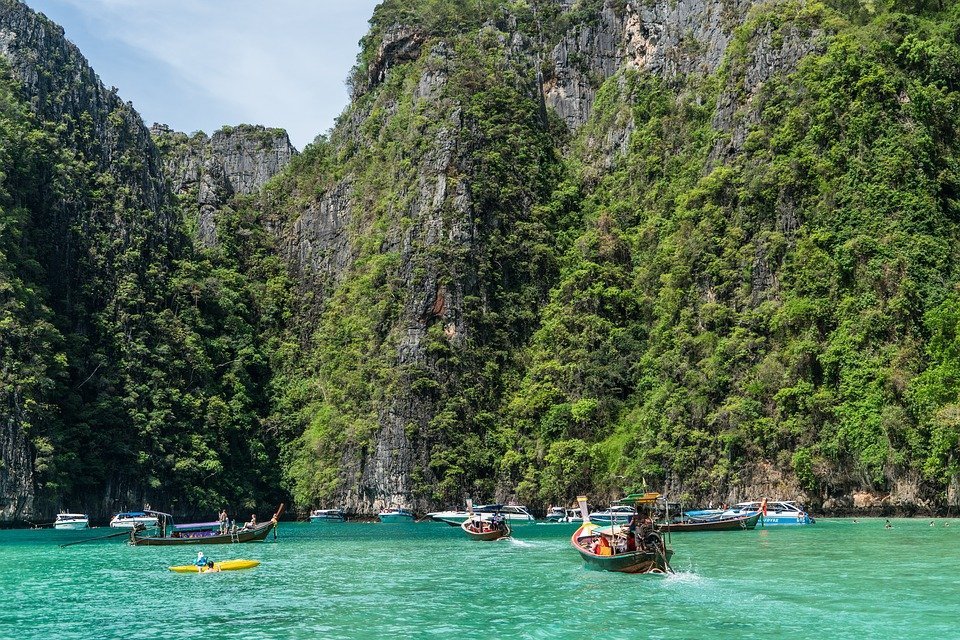 Phi Phi Island is the superstar among all the islands in the ‘Land of Smiles’. It’s been featured in the movies and is so often the topic of conversation for travellers all over Thailand. For some, it’s the only reason to touchdown in Phuket. Even with all the hype surrounding the islands, it never fails to disappoint.

beautiful koh phi phi! great island if you want to party, relax and have lots of pool and beach parties. #traveltips pic.twitter.com/W1Xv1b4PXA

Catch a glimpse of the beauty of Phi Phi Islands

Phi Phi’s natural beauty is a large chunk of the allure. The islands, when approached by boat, rise from the sea like a fortress. Sheer cliffs tower overhead, then give way to beach-fronted jungle which for any traveller simply leads to a love at first sight feeling. The second part of the why-we-love-this-place story is attitude: few places on the planet are this laid-back. Of the two islands located near Phuket and Krabi, one is completely free of human inhabitants (Phi Phi Leh), and the other is without roads (Phi Phi Don). There’s no schedule, no hustle-and-bustle, no reason to be in a hurry.

Below is a list of top 10 Attractions in Phi Phi featuring the most popular sites that Phi Phi has to offer to its visitors. The natural beauty of the area is second to none and provides a great choice of tours and activities to vacationers: it seems that there is always something to see or do in Phi Phi Islands. 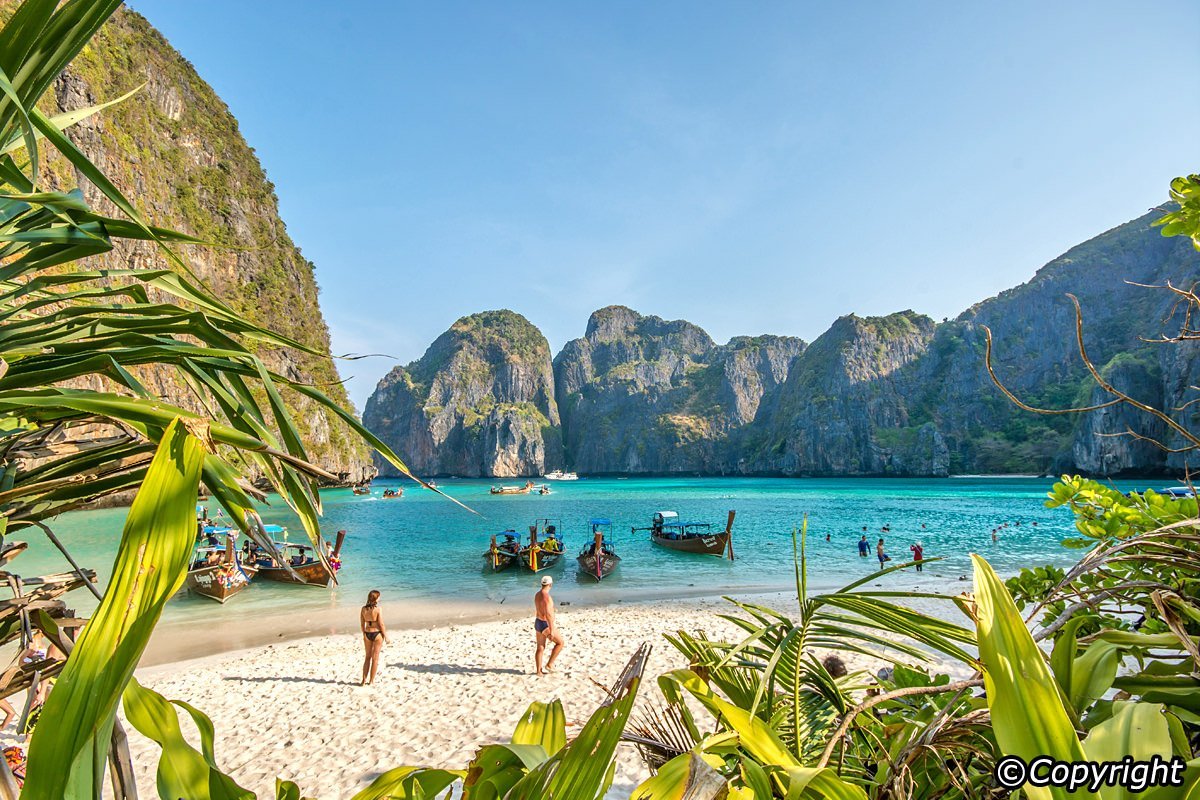 Ko Phi Phi Leh is the second largest island in the small Phi Phi archipelago. Uninhabited apart by a few rangers established in a small camp belonging to the Hat Nopharat Thara-Mu Ko Phi Phi National Park, the island hosts only one beach situated in Maya Bay that became world-famous after the release in 2000 of a blockbuster movie with Leonardo Di Caprio: The Beach. With clear crystal waters, white sand powder, and lush tropical vegetation, Maya Bay gathers all the postcard clichés in one place. 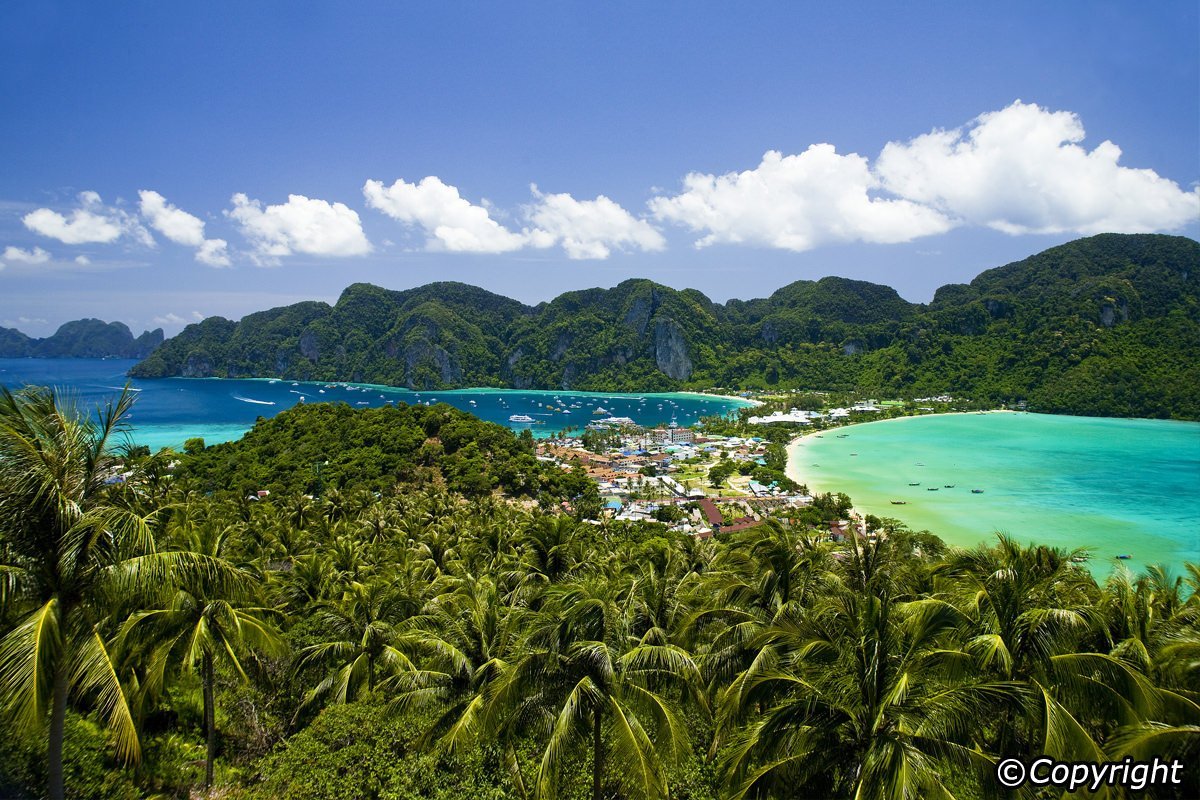 Ko Phi Phi Don has an unusual shape – like an ‘H’ – with its main village built on the horizontal bar, a 100m flat strip of sand stuck between Dalum Bay to the north and Tonsai Bay to the south. The two vertical bars of the H are mountainous and covered with jungle. Phi Phi View Point is located to the east of the flat strip of sand and overlooks the village and the two bays. It is a picture-postcard setting sure to impress friends back home! 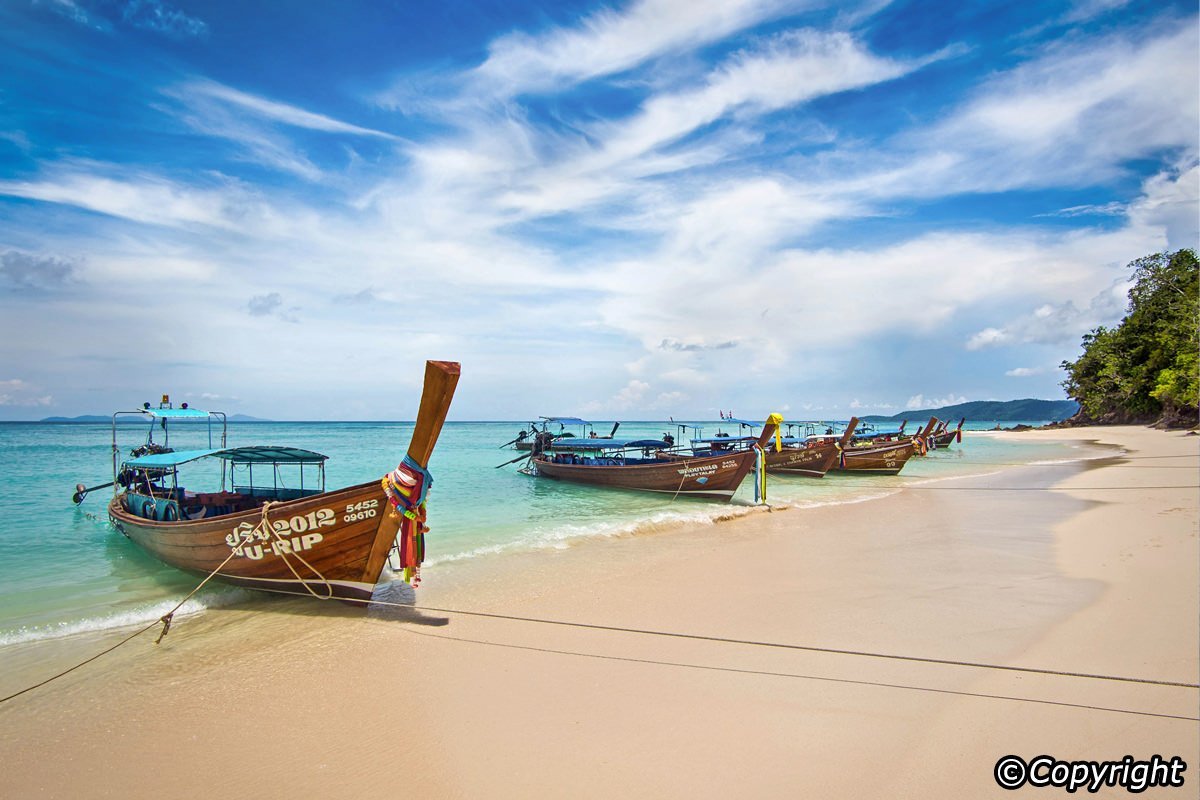 Bamboo Island (Ko Phai in Thai) is one of the six islands belonging to the Phi Phi archipelago in the southern Thai province of Krabi. Lying approximately five kilometres northeast off Ko Phi Phi Don, Bamboo Island is a tropical dream come true; measuring 600m wide by 700m long, the island is entirely surrounded by a strip of white sand, and its central part is covered with lush vegetation including Bamboo trees that gave its name to the island in its central part. The perfect spot for a day trip, Bamboo Island hosts great snorkelling opportunities with the presence of superb coral reefs lying at short distance off its shore, mostly on its western side. 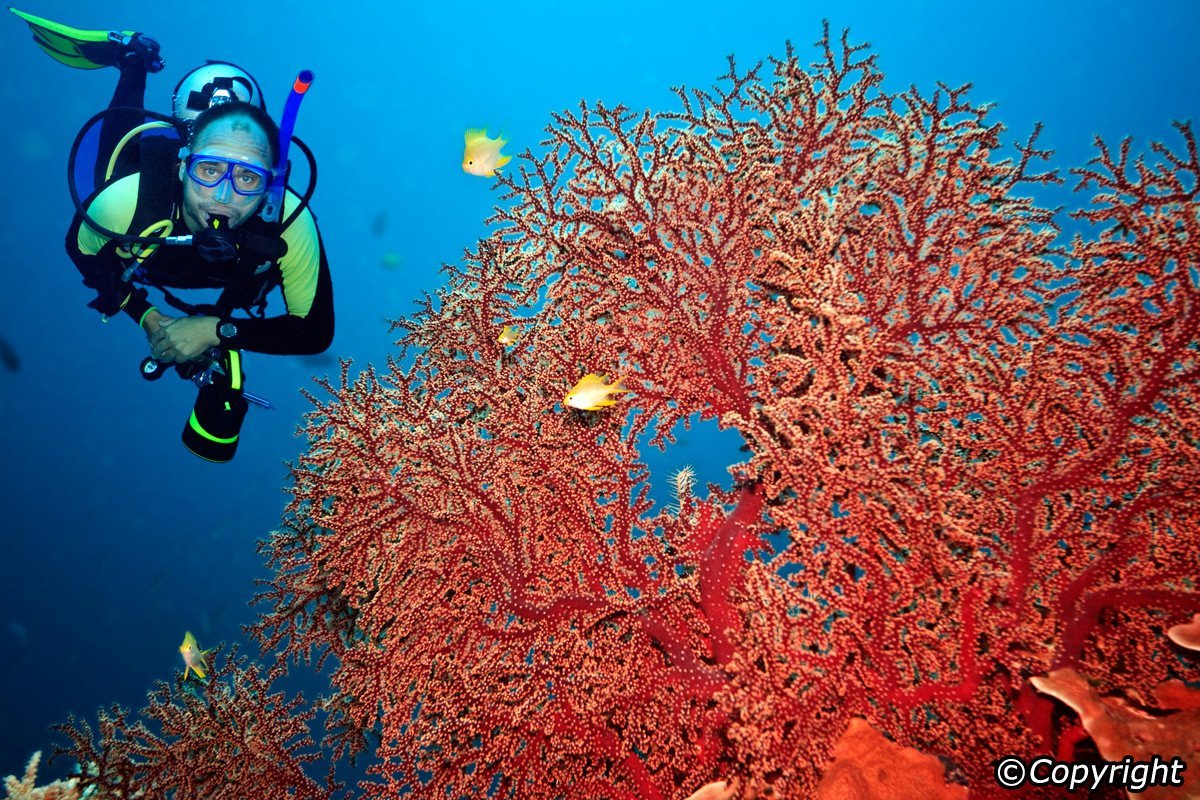 Diving is one of the prime activities in Phi Phi and the island counts a large number of serious and professional PADI dive centres dispensing courses – from Disvover Scuba Diving to Divemaster – and day trips to the many world-class dive sites available in and around Phi Phi waters. Amongst the most notable dive sites of the area, Shark Point, Anemone Reef and the King Cruiser Wreck are located to the west between Phi Phi Islands and Phuket. 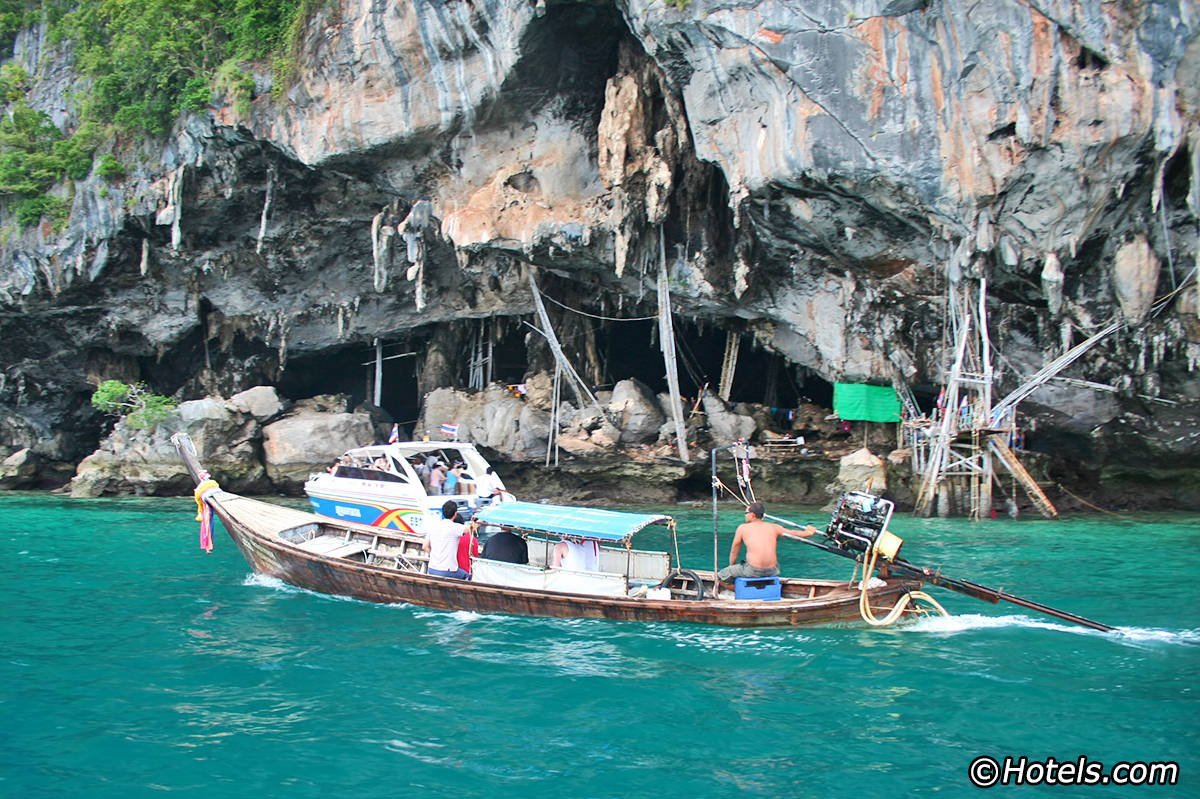 Viking Cave is one of the most notable sites on Ko Phi Phi Leh. Located at the bottom of a tall limestone cliff on the northeastern side of the island, it takes roughly 30 minutes to get there by long-tail boat from Tonsai Bay (the main pier in Phi Phi Islands). Known as Tham Phaya Nak in Thai, Viking Cave owes its name to the paintings found on the eastern southern walls of the cave: they represent various types of boats, including what resembles a Scandinavian drakkar. These paintings are certainly quite recent, and were possibly realised by sailors taking shelter in the cave during a storm. 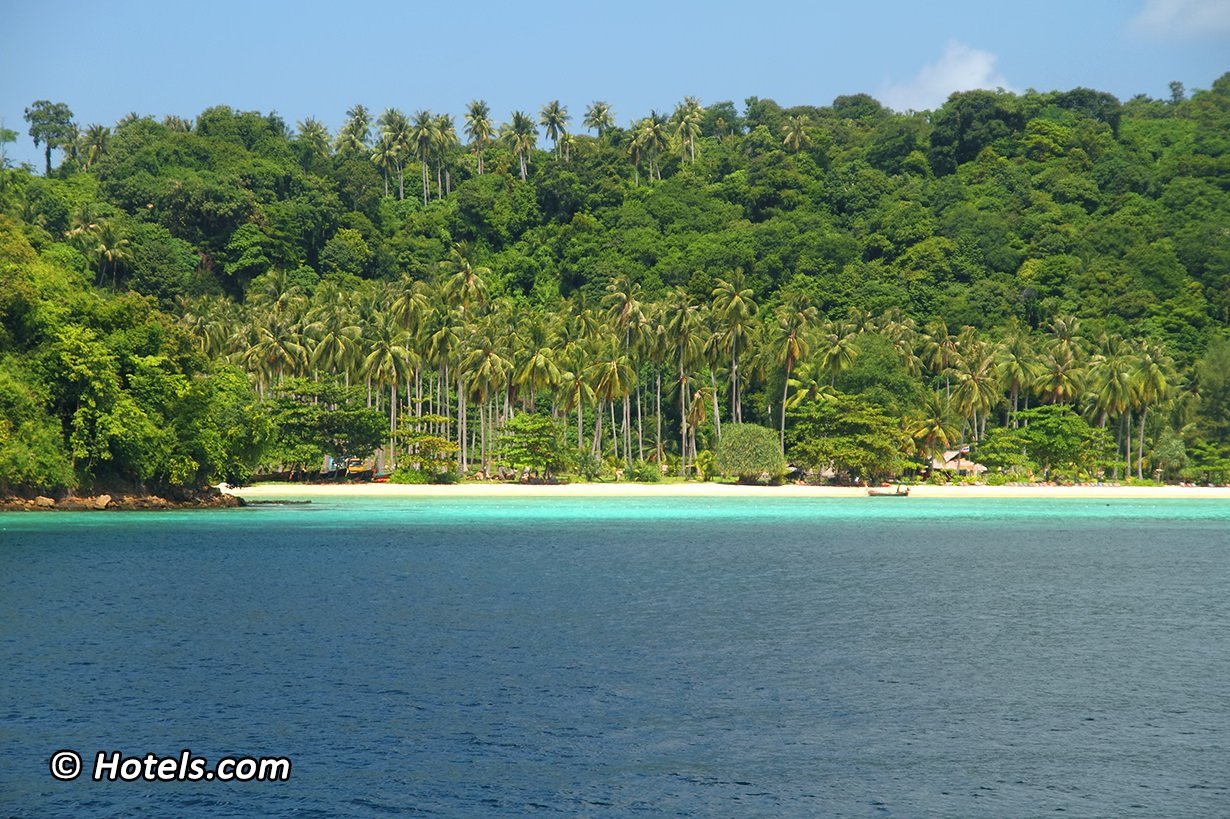 Moo Dee Bay (Loh Moo Dee in Thai) hosts a 500m-long white sand beach bordered by emerald waters. Situated on the east coast of Ko Phi Phi Don, it is the perfect escape from the crowd. The beach offers its visitors pleasant snorkelling opportunities, mostly at both ends of the bay. A Rasta-run shack sells food and drinks. The easiest way to get there is to hire a long-tail boat near Tonsai jetty, which will take you to Moo Dee in about 20mn for a fee of 150/200 baht (you must test your bargaining skill). 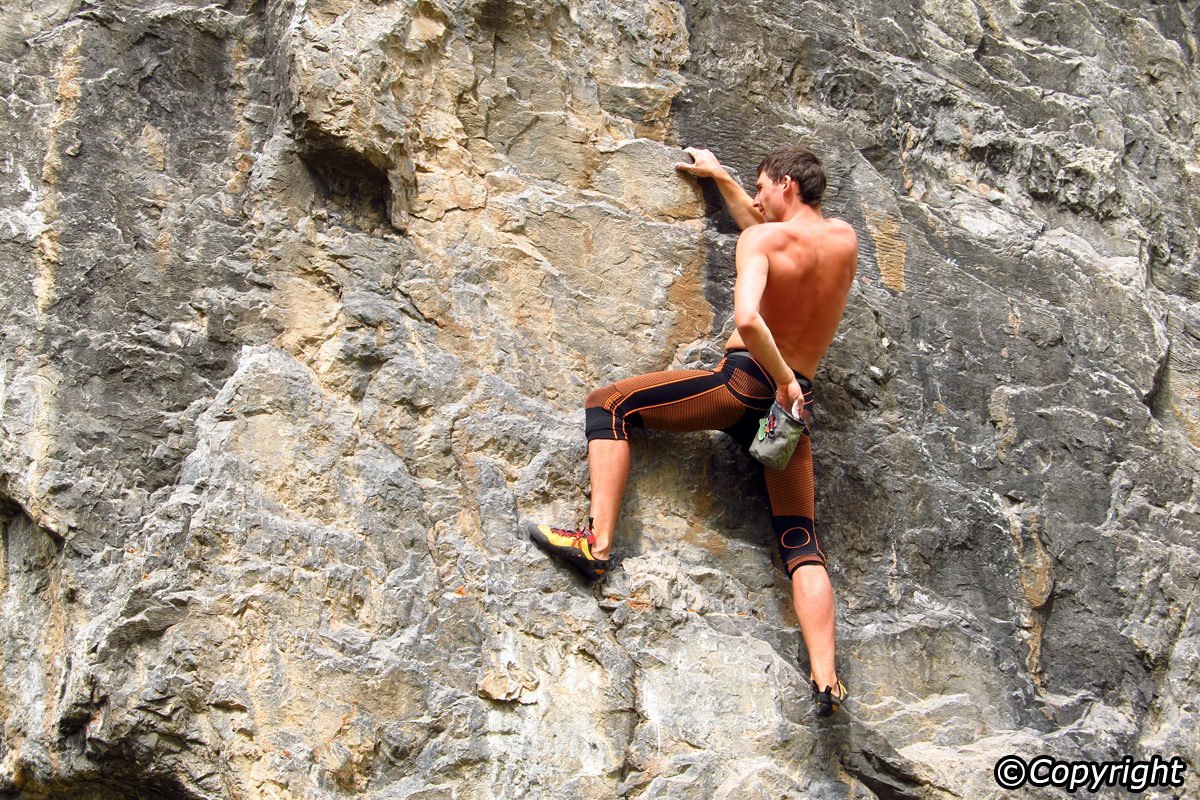 Krabi Province is the Mecca of rock climbing in southern Thailand due to the tall limestone cliffs that are real natural landmarks of the province. Krabi offers world-class sites such as Tonsai Beach and Diamond Cave in Railay, and all along its coast. Phi Phi Don Island may be lying 42km off Krabi coast, but it has the same topography: Tonsai Tower, located at the western end of Tonsai Bay, is the rock climbers’ paradise in Phi Phi; this 200m tall limestone tower hosts 48 different bolted routes featuring all levels of difficulty from beginner to experienced climber. 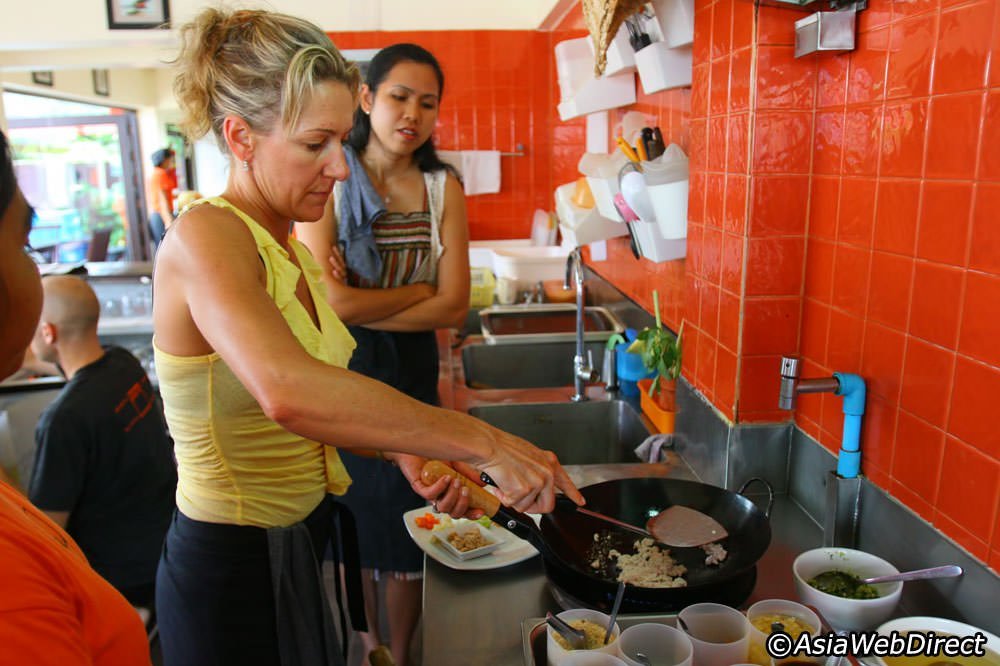 If you would like to cook Thai cuisine by yourself at home after your holiday in Thailand, the best way to learn all the secret techniques and ingredients of Thai cuisine is to join a Thai cooking class. Pum’s Thai Cooking School is one of the most renowned places to do so: its main restaurant/school is located in Patong Beach, and a second branch has opened in Tonsai Village on Koh Phi Phi Don in 2008. 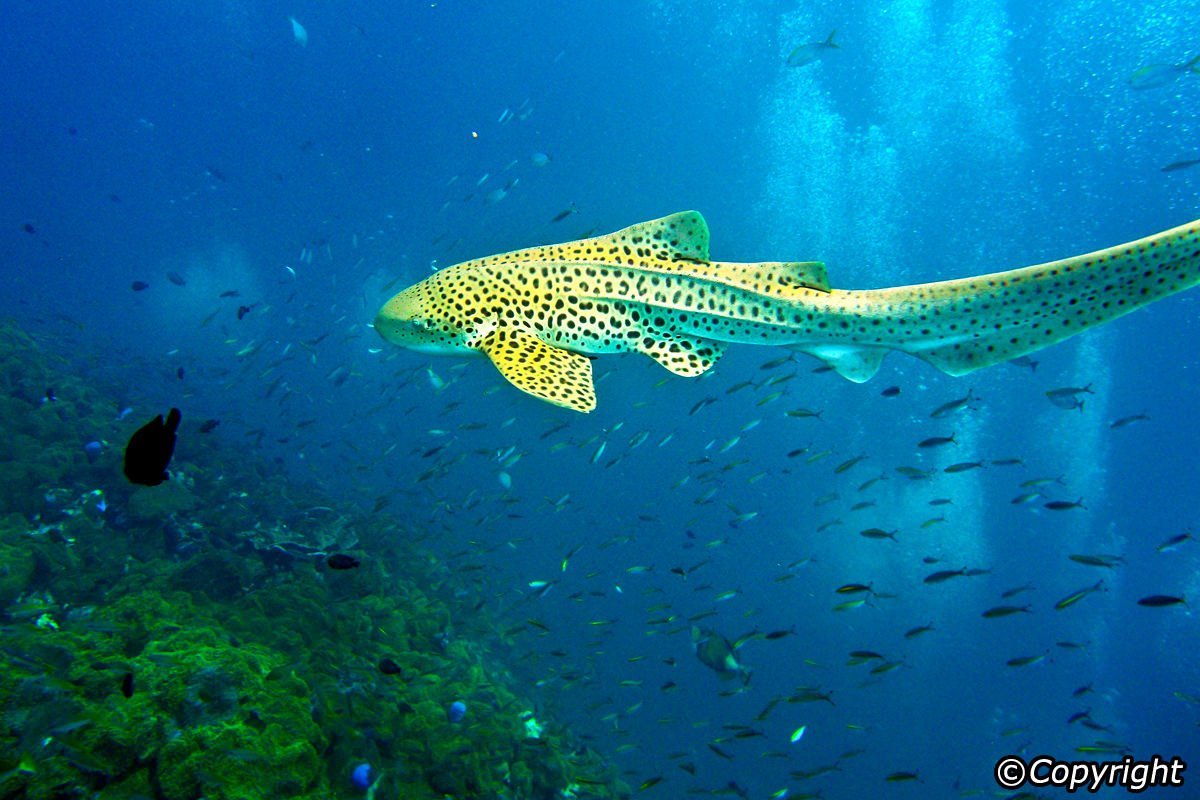 Amongst all the great snorkelling tours available in Ko Phi Phi Don, the Shark watching tours have gained popularity for obvious reasons; since the release in 1975 of Steven Spielberg’s Jaws, sharks have stimulated human imagination – not necessarily in the right way – and aroused curiosity. The waters around Phi Phi Islands host a good number of inoffensive black-tip and leopard sharks. 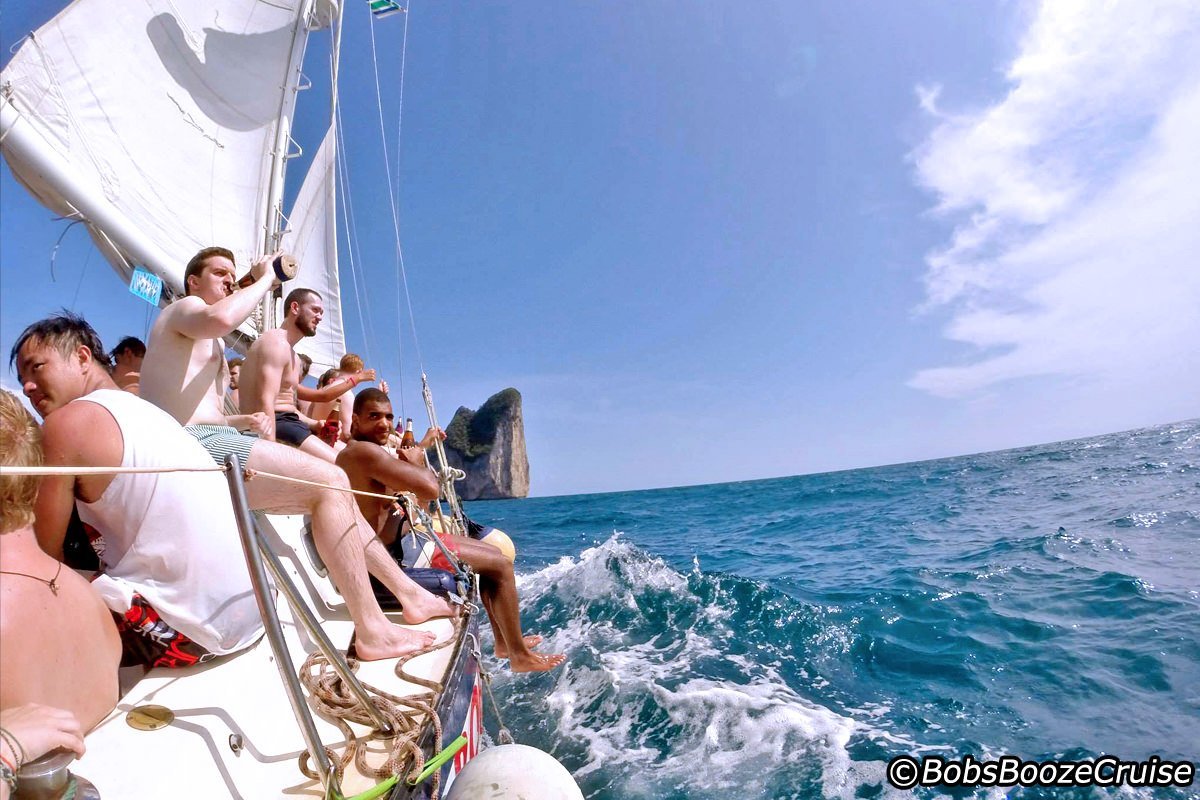 Partygoers and groups of friends can enjoy a fun activity and at the same time discover the most beautiful sites of Phi Phi Islands – Maya Bay, Monkey Beach, Loh Samah, Wang Long Cove, and Pi-Leh Bay – with this rather unhealthy yet exhilarating Captain Bob’s Sailing Booze Cruise. Departing at 13:00 from Tonsai Bay, the cruise visits all the places mentioned above and features snorkelling, fishing, kayaking, cliff jumping, and monkey feeding. Lunch, fruits and snacks are included as well as unlimited beer (hence the cruise’s name). The climax of Captain Bob’s Sailing Booze Cruise – at least for those still able to see it – is the sunset view from Wang Long Cove, on the west coast of Ko Phi Phi Don. 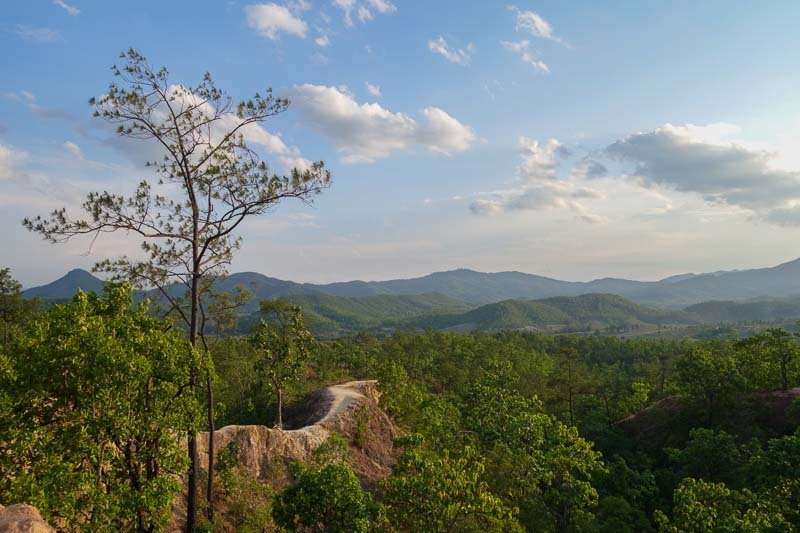 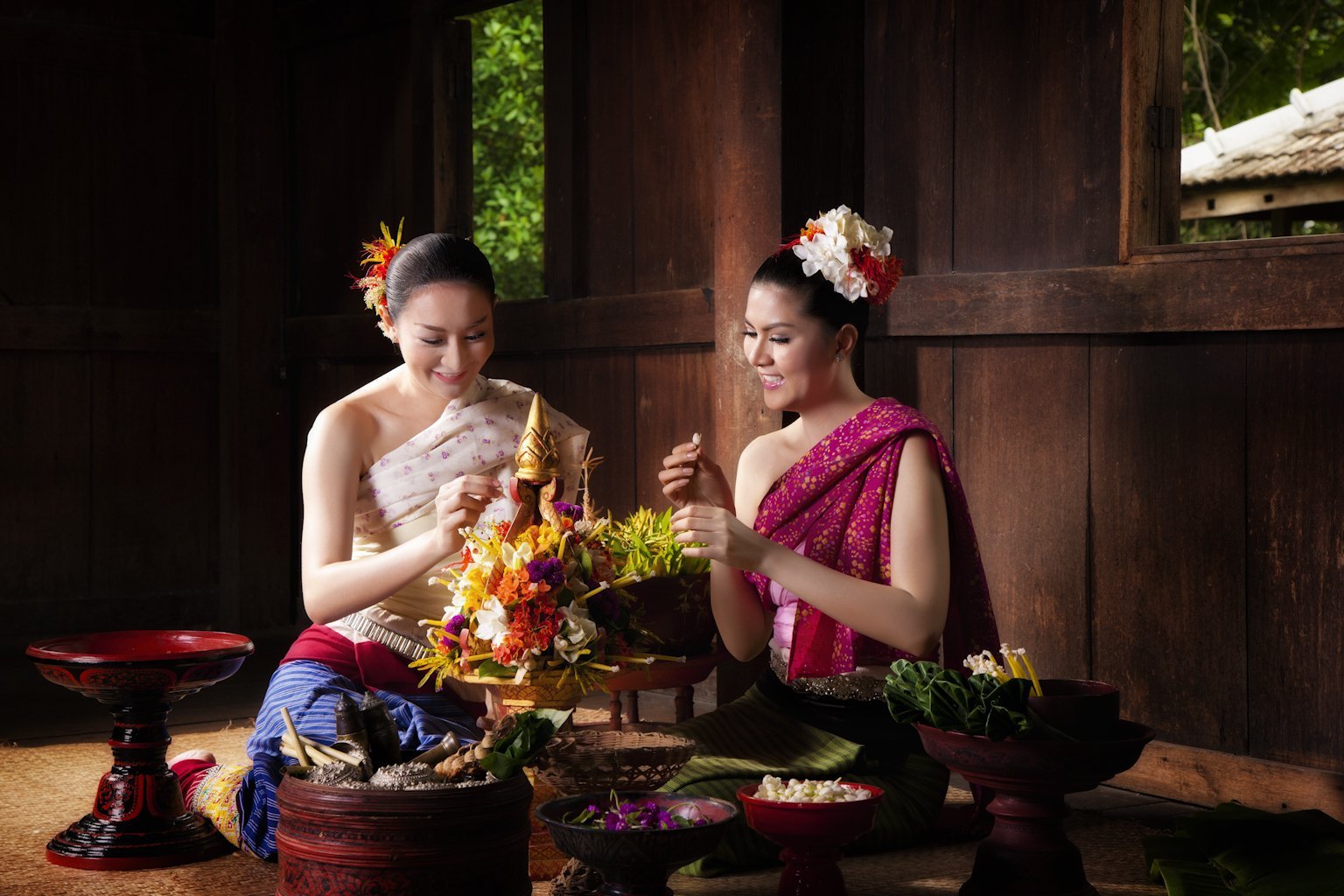