The Pacific Asia Travel Association (PATA) has announced the Tourism Authority of Thailand (TAT) and the Designated Area for Sustainable Tourism Administration (DASTA) among the 25 organisations and individuals to receive the prestigious 2022 PATA Grand and Gold Awards.

TAT won a Gold Award for Digital Marketing Campaign for its #KhaoThaiContest. According to PATA’s announcement, “The #KhaoThaiContest was held thrice. Twice in the year 2020 in the month of May and June, and once in 2021 in the month of April. The theme of the contest was guessing the Thai Cuisine by the community posted on social media platforms and the lucky winners were awarded Thai food from one of the best Thai restaurants in Mumbai (Seefah restaurant). The contest was a huge success keeping the audience engaged and educated about Thai food amidst the lockdown.”

Another Gold Award for Thailand was presented to DASTA in the Heritage category for its “Rejuvenating Ban Khok Mueang’s Heritage through a Sustainable Practice of Community-based Tourism” project.

According to PATA’s announcement, “Ban Khok Mueang is a small village situated in Prakhon Chai District, Buri Ram Province, one of the provinces in the Lower Northeast of Thailand. Given that the village is located on the high plains nearby the two extinct volcanoes; namely, Phanom Rung Volcano and Plai But Volcano, and was part of the formerly prosperous ancient Khmer civilization, the village is, respectively, bestowed with nutrient-rich volcanic soil and valuable architectural ruins of a Khmer-Hindu sanctuary, inheriting the abundance of natural and cultural heritage from the past.

In 2018, the Designated Area for Sustainable Tourism Administration (Public Organisation) or DASTA, an organisation that works to establish sustainable practices in tourism development, came to support Ban Khok Mueang village in developing its first community-specific tourism plan that is deemed to provide community members with a practical guideline of tourism management and development. Among several other communities, Ban Khok Mueang was chosen by DASTA to be one of the model tourist communities for community-based tourism development. For 7 years, the synergy between DASTA and Ban Khok Mueang has been strengthened through the implementation of several activities/projects that, all in all, help the community develop its competence in community-based tourism management strategically and systematically.

Nowadays, besides having well-established economic self-sufficiency created through a sustainable practice of community-based tourism, Ban Khok Mueang also successfully achieves its objective of revitalising and maintaining the significance and relevance of natural and cultural heritage in relation to the ever-changing way of life of people in the community.”

The Pacific Asia Travel Association (PATA) promotes responsible development of the Asia-Pacific travel and tourism industry, and the annual PATA Grand and Gold Awards, sponsored by the Macao Government Tourism Office, were established with the aim of recognising exceptional achievement in a range of media to promote the travel industry in the Asia-Pacific region.

The 2022 PATA Grand and Gold Awards recognise the achievements of 25 separate organisations and individuals, including two Grand Awards, and the awards ceremony was presented during the Virtual Awards Ceremony held on Friday, 7 October, 2022. 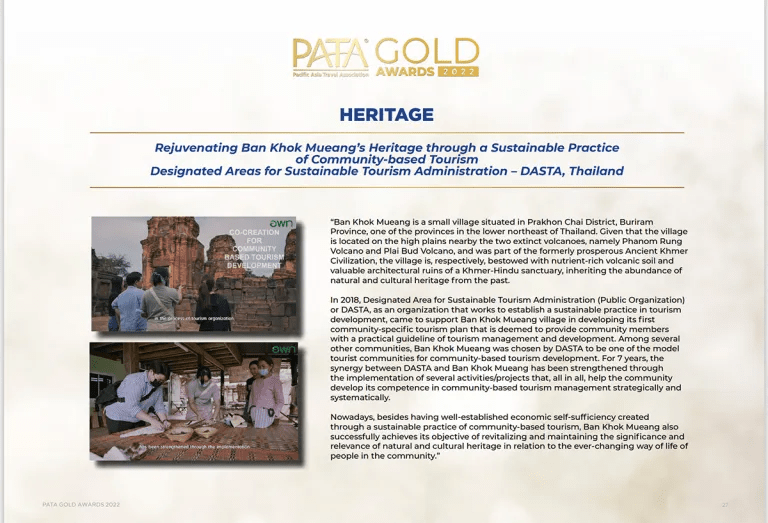