The traditional Thai New Year of Songkran, the biggest and most important of Thailand’s annual festivals, has been celebrated for centuries and is full of tradition and culture.

The word Songkran is derived from ancient Sanskrit, a language dating back thousands of years, and means to ‘step into’, ‘enter’ or ‘pass into’. It describes the monthly movement or ‘astrological passage’ within the zodiac from one sphere to the next; in April the sun leaves the sphere of Aries and enters that of Taurus, a period known as Maha Songkran or the Great Songkran. This signifies the start of the Thai New Year.

The festival is said to have its origins in a Hindu spring festival that marked the arrival of the new harvest season in ancient India. While other Southeast Asian countries celebrate a similar traditional new year holiday, Thailand’s Songkran is the most well-known around the world.

Songkran in Thailand is officially observed as a three-day national holiday from 13-15 April, although celebrations can go on for longer – up to a week in some places.

The first day of the festival, 13 April and which is known as Songkran Day, sees people clean their homes and public places likes temples and schools to get rid of any bad luck from the previous year and ready them for the new year. Another main activity is Song Nam Phra, a ritual that involves the pouring of scented water onto a temple’s sacred Buddha images. It is important to note the water (traditionally scented with a perfume called Nam Ob) is poured not onto the head of the image, but rather the torso and body.

The second day, 14 April, is referred to as Wan Nao and is when people prepare food and offerings to be given to monks and temples the following day. It is also a time to pay respect to elders, and young people prepare rose and jasmine water as well as Nam Op scented water with which to wash their parents’ feet in a ceremony called Rot Nam Dam Hua. The parents in return give the children their blessings, typically along with a jasmine floral garland. Many people will also make sand stupas – known as Chedi Sai – in the grounds of their local temple as a kind of personal pagoda and a fun family way to make a spiritual offering.

People also like creating a dash of good karma by releasing caged birds, or fish into waterways. This happens nationwide, although one of the best places to watch or even partake in it is at Phra Pradaeng in Samut Prakan province. The ceremony has been part of the tradition at Wat Proteket Chettaram for decades.

15 April, the third day of Songkran, is known as Wan Payawan and people typically start the day by visiting their local temple to present food and clothing to the monks, who then pray for them. They also partake in other rituals believed to bring good luck for the new year.

Also indispensable at Songkran are floral garlands, which add a fragrant and beautiful touch to festivities. Three main types of fragrant flowers are typically used to make these garlands – dok mali (jasmine), dok champhi (white champaca) and roses. The Phuang Malai or floral garland is popular to give to elder relatives to express love and respect.

Songkran is celebrated by everyone, everywhere throughout Thailand and is a time for people who have moved to other cities or towns to travel back home and spend time with their family. Public transportation and hotels can be fully booked up months in advance, and so it is a good idea to plan as far ahead as possible.

And needless to say, always be careful if using the roads during this celebratory time, when people can tend to be less cautious than usual. Do not even consider driving if you have been drinking alcohol. If using a motorbike wear a helmet. 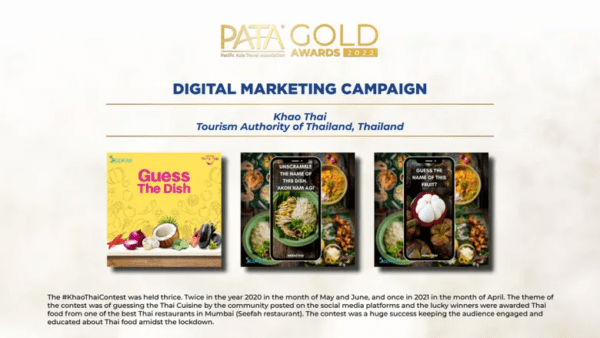 For TAT’s #KhaoThaiContest in the Digital Marketing Campaign category and DASTA’s Ban Khok Mueang community-based tourism development in the Heritage category. The…
By Tourism Authority of ThailandOctober 8, 2022